Who is responsible for clearing snow/ice from sidewalks in NYC?

Snowfall in York City is predicted to be above-average this winter. With the potential of several 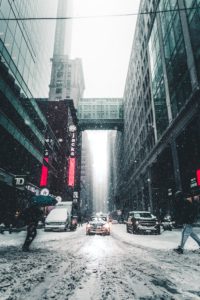 feet of snow over the course of winter, snow removal could be a constant reality and danger for New York City residents and commuters. Since snow on sidewalks can be dangerous and a public hazard, those responsible for its removal not only face fines when they fail to remove it, they can also face civil penalties if someone is injured as a result of their failure to remove snow.
According to New York City Code Section 16-123, property owners, tenants, lesse, occupants or any person that is responsible for a building or lot must clean the snow or ice from the adjacent sidewalks. Areas that must be cleared of snow include sidewalks in the front, on the side and the back of properties. Depending on the time of the snowfall, those responsible must either clear it
within 4 hours (if the snow stops between 7:00 am- 4:49 pm) or within 14 hours (if the snow stops falling between 5:00 pm and 8:59 pm). If the snow stops between 9:00 pm and 6:49 pm, it must be clear by 11:00 am the next day.

New York City even has instructions on what is considered the best way to clean snow from the
sidewalk. The City instructs tenants not to push snow into the street and instead to move snow to
one’s front yard, behind a stoop or in the grassy curb strip if the property has one. Furthermore,
when possible those responsible for snow removal should clear a path that is at least 4 feet wide.
So what happens when those responsible fail to clean snow and ice in a timely matter?
Depending on the number of previous offenses, those responsible for snow removal can face
fines of up to $350 per offense. However, the real cost for failure to clean snow and ice may be
those incurred by individuals that are injured as a result of a failure to remove snow and ice. In
fact, the physical and financial cost of failing to remove snow properly is high, as thousands of
people are injured every year by ice, sleet, and snow.

Those injured due to the failure of property owners or managers failing to remove snow or ice
may be able to hold those individuals liable. According to the New York City Administrative
Code Sidewalk Rules, those responsible for commercial buildings or residential properties with
four families or more are liable for failure to maintain a sidewalk in a reasonably safe condition.
In addition, many landlords and business owners have contracts with snow removal companies.
If the snow removal companies failed to properly uphold their contract and remove snow and ice
promptly, the companies may also be liable for serious injury or wrongful death that results from
an ice or snow-related fall.

If you or someone you love was injured as a result of someone else’s failure to remove snow as
required by law, contact the attorneys at GREENBERG LAW P.C. today. Get the compensation
you deserve with a compassionate, committed, and capable team of trial attorneys fighting to win
your case.

Paying medical bills if you’ve been injured in a car accident
According to the CDC Americans spent more than 1 million days in the hospital each year as a
result of a car crash. Out of the 2.5 million people that go to the emergency room each year from
car crash-related injuries, almost 200,000 of them end up admitted as a result of their injury.
According to the same report by the CDC, an emergency room visit related to a car crash on
average costs about $3,300. Furthermore, once someone’s injuries are serious enough to get them
hospitalized, the cost of the car-related injury on average is $57,000 over the injured party’s
lifetime.

Medical Bills related to car accidents can be medically serious and financially straining. When
you or your loved one has just been injured in a car accident worrying about how you are going
to pay the medical bills is an added stress you do not need. However, you may not need to be
stuck with huge medical bills.

In New York, those injured in car accidents may have a needed lifeline for medical bills. New
York is a “no-fault state,” meaning that those who are insured are usually reimbursed up to
$50,000 costs related to bodily injuries, up to $50,000. The no-fault benefits are paid whether or
not the person injured was the passenger, driver or someone struck by the vehicle. The benefit
can cover medical bills, lost wages, prescription drugs and other costs related to the accident.
However, the benefits must be filed within 30 days of the accident.

With the average car crash-related injury reaching over $50,000 in a lifetime, the cost related to a
car crash injury may far exceed the no-fault benefits. Those injured in a car accident may be able
to recover additional money as a result of their injury.

If you or someone you love was injured as a result of a car accident you may be able to receive
additional money to cover costs related to your injuries. For more information contact the
attorneys at GREENBERG LAW P.C. today. Get the compensation you deserve with a
compassionate, committed, and capable team of trial attorneys fighting to win your case.